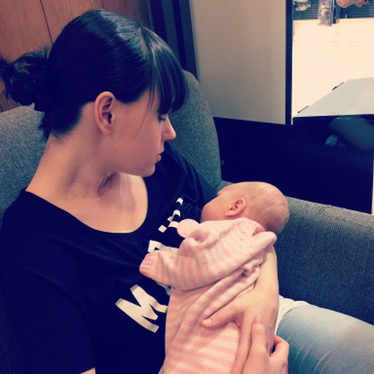 A few months ago I hit a milestone that seems crazy to me – I’ve been pregnant or breastfeeding for five years, and I’ve only got two kids!

When I became pregnant with my son it was a surprise. My attitude to breastfeeding was ‘I’ll give it at go but if it’s not for me I’ll bottle feed’. We bought some bottles and formula just in case (both ready made and powdered).

I was pretty ignorant of all things breastfeeding (and baby to be honest).
I had zero awareness of the potential ‘booby traps’ – a few of which we fell head first into (including the oft made mistake of giving him formula because we were worried he wasn’t getting anything from me because he wanted to be on the boob a lot). Fortunately we didn’t derail breastfeeding for us like it can for so many.

When I had him my attitude changed from being ambivalent about breastfeeding to feeling like I absolutely had to. It was a visceral primal instinct I hadn’t expected to feel. I really wanted to nurse him. My unexpected emergency c section contributed to the feeling as well though, whilst I know it wasn’t rational, I felt I had ‘failed’ at my birth and therefore could not also ‘fail’ at breastfeeding. It was, to me, an opportunity of self redemption.

Unfortunately breastfeeding my son was very difficult for me. As is too often the case regarding breastfeeding, the NHS let me down. I was offered substandard support, conflicting advice and often told to just stop nursing. Not one person (and I must have seen at least a dozen in desperation) diagnosed my son’s tongue and lip tie, despite me asking for him to be checked. Breastfeeding was painful for 6 months for me and I had a particularly rough trot of recurring milk blebs, blocked ducts and mastitis. I even had to go to hospital once to be checked for an abscess. It was stressful and unnecessary when all I needed was for an IBCLC to see me and give me proper support, diagnose the tongue tie and arrange a revision for me. That could have saved me a world of tears, stress and pain.

This is precisely what I did with my daughter and I only had pain for days instead of months. The power of knowledge. I wish every doctor’s surgery and hospital had IBCLCs attached, that you could simply book an appointment with like a GP. Or at least every town or region. I guarantee breastfeeding rates would improve. Don’t we deserve AT LEAST that?!

We also found out that my son has a Cow’s Milk Protein Allergy when he was 6 months old so I had to cut dairy for 2 years (difficult, but I’ve never been skinnier!). I wrote about that experience in a previous post. So through sheer will, I continued to nurse my son until he was 2.5 years old and he self weaned, then a week later I got pregnant with my daughter.

Breastfeeding started off painful again but I got proper support from an IBCLC (the incredible Amanda Dunbar) who diagnosed a tongue tie but a functional one that did not require revision. She gave me good advice for improving the latch through positioning and showed me the flipple technique that despite having nursed for 2.5 years I was unaware of.
Nursing my daughter has been much easier. I’m more experienced and knowledgable but I still have issues with oversupply and I’m very prone to blocked ducts and mastitis. At the moment, I’m in a particularly rough patch where I’m getting them every other week. I’m a bit fed up with it and have been trying to get help on the NHS but am not getting very far unfortunately. I sought help out from my GP who sent me to the local breast clinic who were pretty awful. The consultant told me to just quit as it was happening because I’d been nursing so long (bullshit, and she’s only 15 months) and when I said I didn’t want to he said I was ‘a fundamentalist about breastfeeding’. I’ve seen Amanda my IBCLC again who gave me some positioning tips and I’m currently trying to go ‘back to basics’.

I plan to continue to overcome these issues and nurse my daughter until she self weans, I’m hoping this is after she is at least 2. Why? Because I strongly believe it’s what is best for her, and me. For a myriad of health, development and attachment reasons continously demonstrated by evidence based research. But the biggest reason is its easy and it works. I’ve no idea how I’d get her to sleep every time she wakes in the night without it. Actually, I do, by rocking and pacing. Screw that, this way I don’t have to get out of bed. She asks for it now by signing and smiling at me and she’s so damn cute I could never say no.

The pre-baby me never thought about the restrictions I would face from being pregnant or breastfeeding or how long I would do it for. I was clueless about breastfeeding. I had no idea how long kids breastfed for. I thought it would be a few weeks or months, 6 max. I hadn’t done much research. I had heard stuff about expressing and giving babies bottles so thought it would be easy to get out and about still. I hadn’t heard anything about needing to express while the baby took that feed to relieve your engorgement and maintain your supply. I didn’t think about where the milk went when the baby skipped a feed. I had no idea it was supply and demand.

So clueless was I, that when I was 9 months pregnant, I went shopping with my sister who had a 3 month old baby. My niece was feeding on and off constantly and in surprise (and worry), I muttered the words any breastfeeder HATES to hear ‘why is she feeding so much? Why don’t you just give her a bottle’ or something else extremely ignorant to that effect. I look back and cringe at my obnoxiousness. I really should have been more knowledgable at that point but I was just like most women in a formula feeding culture. There just isn’t that shared knowledge and understanding about nursing that there should be. Fortunately my sister was doing a great job at nursing and it was through her support (and other women, primarily online) that I succeeded in breastfeeding my son – despite my ignorance and troubles.

I think that I thought 9 months and the restrictions on my life would be over. I never imagined that 5 years on I would still be constrained in the amount of time I could be apart from my child. I think if I had known that and understood what it meant I would have been afraid of the commitment. However having gone through it organically, it has actually become easier as time has gone on, not harder. I’m quite used to making these adjustments now, I don’t get to have as much freedom but I know it’s not forever. My baby won’t be a baby for long and my freedom will return again, or at least to a mam’s version of it.

When all is said and done though, despite the challenges, I really do love breastfeeding my babies and I’d never have it any other way. It’s taught me so much about myself and shaped who I am as a mother. It’s even taught me to love my boobs finally – anything that puts a smile on my baby’s face like that is a beautiful thing, no matter what shape or size (or wonkiness) the are.  I’m proud and grateful of the journey I’ve been on through breastfeeding, there have been many times I wanted to give up but not doing so has made me stronger and I’m so pleased I didn’t. People can criticise brelfies but I know I’m going to look back on mine wistfully with nostalgia, remembering what a truly precious time it was.

3 thoughts on “My breastfeeding journey”