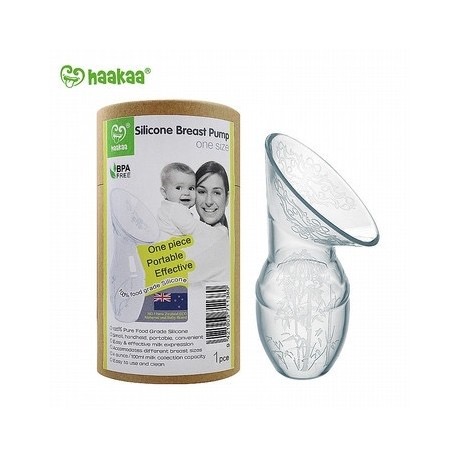 I breastfed for 7 years in total and continued to breastfeeding after I returned to work for several years. Here is my honest and thorough Haakaa breast pump review, including the pros, cons, what it is good for, what it’s not good for, how to use it, where to buy it and more…

Haakaa kindly sent me the following fabulous products to review back in August 2016. Please note whilst this post was originally written August 2016 but has been updated June 2022.

What is a haakaa pump

The Haakaa breast pump (affiliate link) is 100% medical grade, eco-friendly and simple to use one piece ‘breast pump’ that suctions onto the breast to collect breastmilk.

It is different to traditional manual and electric breast pumps as it doesn’t ‘pump’ the nipple but uses suction pressure to draw the milk out.

It’s a hybrid of a milk collector that passively collects milk and a traditional breast pump that uses suction to remove milk.

I was really excited to see New Zealand brand Haakaa enter the market with their silicone suction breast pump.

When I looked into the brand I was excited to see that Haakaa only uses environmentally friendly and safe raw materials such as stainless steel, glass, bamboo, and natural rubber. What else would we expect from the country that brought us Jacinda Ardern?!

An eco-brand that has produced an innovative breast pump that people are raving about – I was intrigued!

Things I love about the Haakaa breast pump

The first thing that strikes you about the Haakaa breast pump is that it is all one piece.

For someone who has been breastfeeding since 2011 and is used to assembling (and cleaning) lots of pump pieces, I found this marvellous!

It’s super easy to use and clean, a major positive for any busy Mam.

It is made of 100% food-grade (i.e. BPA, PVC and Phthalate free) silicone and totally flexible.

So much so that I was able to take it on my first night out away from my daughter and it fit easily in my small ‘going out bag’, something no other breast pump I’ve seen could do.

The Haakaa bottle/pump is really pretty with intricate pretty raised pattern on it. It’s really quite stylish as far as breast pumps go.

The other thing that excites me about the Haakaa breast pump is the price. It’s currently under £20 on Amazon (affiliate link) which makes it one of the most affordable breast pumps on the UK market.

Does the Haakaa work as a breast pump?

The Haakaa does work as a breast pump but it can be a bit tricky to get the hang of it at first. Once you’ve figured it out though, it’s pretty easy.

The first time I tried it, nothing much happened. I followed the instructions which said to pump the bottle (unlike what I had read by users online) and this didn’t work for me. I attached it a few times and couldn’t get any milk out.

I was sceptical and thought, this isn’t going to work and gave up fast, in my defence it was 2am and I had just got back from my first night out in over 2 years.

Then I watched some YouTube videos and could see how it worked and that sometimes you need to reposition a couple of times first and thought I would try it again.

Haakaa breast pump – how to use

The BIG thing that made me REALLY excited me about this product is that I had heard you could just attach it to your breast and it just pulls the milk out – hands-free with no actual pumping.

Other mothers said it worked best if you are already feeding or expressing off one side so I gave it a try while I was expressing on my lunch break at work and this time it worked a treat!

Again, it took a few goes at finding a good position.

You position it over the areola and then squeeze and it simply attaches on using suction – so the bottle part is all sucked in on itself.

Then after a little while the bottle pops back out into its original shape but stays attached to the breast and for me this is when my milk started to spray.

I really want to do a video for you but I’m not sure I’m ready for my exposed nipples to be on YouTube!

How long should I pump with Haakaa manual breast pump?

Normally on my lunch break (read my post about continuing to breastfeeding once you return to work here) I would get around 3oz from that breast in around 10-15 minutes.

In the 10-15 mins that the electric pump was on the left breast getting just under 3oz, the Haakaa pump was on the right and without any actual ‘pumping’ it pulled out nearly 2oz, entirely hands free. I was really impressed.

I was restricted by time as I only get 30 minutes for my lunch break to both eat and express so I did finish the breast off with the Medela getting just over an additional ounce off, taking me to my 3oz ish usual total.

I reckon I probably could have played with it a bit longer and got that.

You could also try breast massage whilst the Haakaa is attached to speed up/increase the amount of milk expressed.

I’ve now used the Haakaa breast pump a few times, including when I’m not nursing or expressing.

My daughter is currently teething and heavily favouring one breast. A couple of the times she’s nursed on one breast, refused the other and then gone to sleep, leaving me with one full breast.

I don’t like to leave a boob full for too long. At the same time though I don’t want to risk waking my daughter using a noisy breast pump.

The Haakaa breast pump has proven to be perfect in this scenario. Each time I’ve used it on an evening while my partner and I watch a TV show and my daughter snoozes in Papa Ginge’s arms.

Not only can I relax hands-free and just let the pump do its job, it doesn’t disturb the baby or (importantly) our TV watching (unlike my Medela).

Again each time I’ve used it I have got around 2oz off effortlessly, it’s taken the edge off my engorgement and prevented me getting mastitis.

Personally, I wouldn’t use the Haakaa to replace an electric pump if you have to express regularly or exclusively (and in fact there are questions about the nutritional content of milk collected this way as ‘drip milk’).

Using a good electric breast pump, particularly a double is just more efficient when you are doing it a lot. Especially now that you have new technology like the discreet wearable Elvie pump (affiliate link).

However, what I think the Haakaa pump is brilliant for is the following:

I’m going to take mine on our kid free trip to London. The double pump will take up too much room (and you can’t use it with batteries) so I’ll take my Medela swing (below) and this and I can use them together and it will take up much less room in my bag. I’m also considering getting a second to try doing both breasts at the same time.

Why is Haakaa not recommended?

The Haakaa does remove some milk from your breast that won’t be available for your baby. But, if you leak from the other side when breastfeeding, that milk would be lost regardless.

Jessica Anderson, IBCLC, CLC from Genuine Lactation warns: ‘Milk supply is driven by stimulation and milk removal. The Haakaa can encourage milk removal, but it cannot provide the stimulation needed to drive further milk production in the same way a baby or an electric breast pump can.’ So basically don’t be skipping feeds with the haakaa regularly.

I would not recommend Haakaa for exclusive pumping as it’s not as efficient or quick as a traditional breast pump, nor does it stimulate the breast in the same way for milk production. It may also draw down more foremilk and not be as balanced of a milk as milk fed or pumped by traditional pumps.

How does Haakaa increase milk supply?

The Haakaa removes breastmilk from the breast which can encourage your body to make more milk.

However, it will not be as effective at increasing milk supply as a traditional breast pump or a baby as it lacks the nipple stimulation through the repetitive sucking/squeezing motion.

Do you wash Haakaa after every use?

Yes, like all things used for your baby you should wash and sterilise. your Haakaa breast pump after each use.

Things that could be better about the Haakaa pump

The only thing I didn’t like is that the lid wasn’t secure. It’s really just meant as a cap to protect the milk in the fridge etc but you couldn’t express with this and put the lid on to transport the milk home in your bag. It would definitely leak. You would need to take a secure container to put it in or dump the milk. Given the pump is so tiny though, it’s not a big deal. I’d just pop a breast milk freezer bag in my bag with it for transfer afterwards.

(Update 29/6/22 – Haakaa have recently introduced a new upgraded silicone lid that is leak-proof, it’s not something I’ve personally tried yet though.) You can buy the leak-proof lid set here (affiliate link).

Also, as I’ve mentioned sometimes it does take a bit of positioning to get it going right but like most things, once you get used to it you get quicker at it.

Do be wary if you are tempted to buy copies or fakes of the Haakaa breast pump.

Often, these products haven’t had any safety testing at all. For a product you are using to collect breast milk for your baby personally I would stay well clear of them and stick to ones with the appropriate safety testing.

Summary of my opinion on the Haakaa silicone breast pump

So overall I’d give the pump a 9/10, it’s affordable and is a useful tool for a nursing mother to have in her breastfeeding arsenal.

It’s an easy and quiet way to collect drip milk from the breast your baby isn’t using.

However if you express exclusively or regularly I wouldn’t expect the Haakaa manual breast pump to replace your electric pump entirely.

I’m thrilled to see this product on the market, especially from an eco company. You can buy the Haakaa here (affiliate link).

Where to buy the haakaa breast pump uk

You can now also buy a baby bottle Haakaa pump (below) – where the pump attachment is on a bottle so you can easily remove the pump when it comes to feeding your baby and replace with a teat. I imagine it reduces some washing up. You can even attach milk bags to them so they take up even less space.

There are also bottle options with a suction base so it doesn’t tip over (is there anything worse than spilling your breastmilk!) and a flower stopper for the bottle.

Disclaimer: This is post contains some gifted items. This post also contains affiliate links. If you buy an item through an affiliate link you won’t pay any more for that item but I will receive a small referral fee. As an Amazon Associate, I earn from qualifying purchases. For my full disclosure please see my about page.