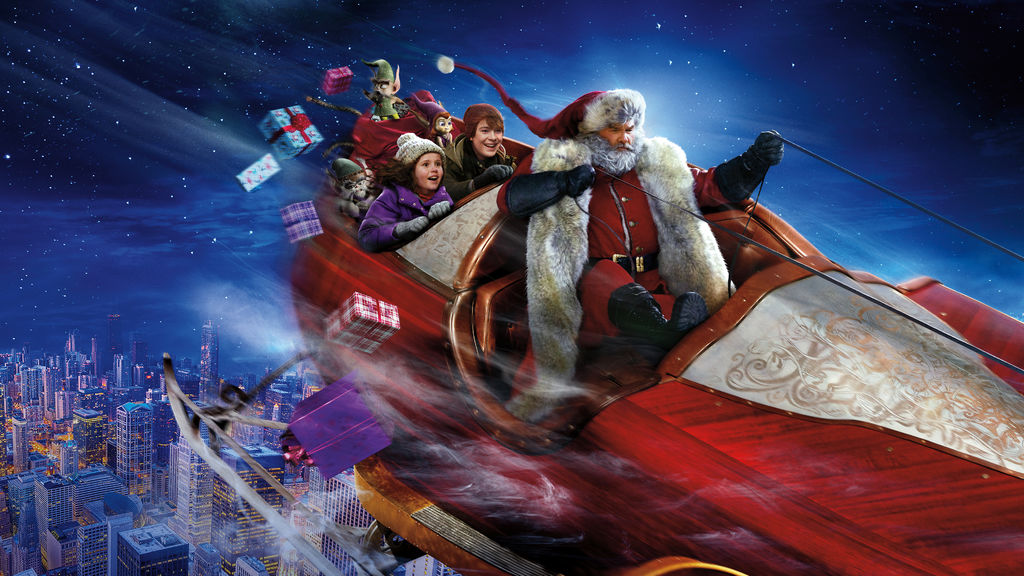 You lovely lot seemed to enjoy my ultimate guide to the best Halloween TV shows and films for families with young children so much that I thought I would do a Christmas one. This is aimed at families with young children. None of the films are over a PG rating. Like the Halloween guide for your convenience, where possible I’ve noted the year they were released, the age rating, the IMDB rating and a link to buy them (or rent them) if they are on Amazon. If it’s available on Netflix, I’ve mentioned it. The Disney ones will be available on Disney Plus too. I’ve ordered them from most recent to oldest for your ease. I hope you find this helpful…

Wow, does this one have a great (and predominately black) cast – Forest Whitaker, Phylicia Rashad and Hugh Bonneville to name but a few. The trailer for this gave me goosebumps and Greatest Showman vibes – I think it could be the runaway lead Netflix Christmas film this year! It’s a Christmas musical featuring music by John Legend.

An imaginary world comes to life in a holiday tale of an eccentric toymaker, his adventurous granddaughter, and a magical invention that has the power to change their lives forever.

A new holiday classic is born.

One of the biggest Christmas movies Netflix has released under its Original library is Kurt Russell’s portrayal of Santa in The Christmas Chronicles which debuted two years ago. Now, he’s back for another outing with Chris Columbus (Home Alone and Harry Potter) returning to direct. The first movie was superb so there are high hopes pinned on this sequel. Kate Pierce, now a cynical teen, is unexpectedly reunited with Santa Claus when a mysterious troublemaker threatens to cancel Christmas – forever.

Never has Santa been hotter. There I said it.

It's time for Mrs. Claus to get her due.

Kurt Russell & @GoldieHawn are back to save the holidays in THE CHRISTMAS CHRONICLES 2, only on Netflix 25 November. pic.twitter.com/wKAzAVoQBF

Based on a popular Michael Morpurgo book, this 25-minute animated children’s Christmas adventure tells the story of a shy girl who discovers a baby dragon in her family woodshed, and the journey she subsequently embarks on to return it to its mother. My 4 year old loves dragons so this will be a must watch for us. Our new family favourite. This one is going to be a classic I can tell. From the people who brought us Harry Potter the Philosopher’s Stone and Home Alone, it’s the best new Christmas movie to come along in years. Kurt Russell is frankly a GILF as Santa. Don’t believe me, wait till his singing number and you’ll find yourself asking if it’s wrong to fancy Father Christmas. It’s a classic ‘save Christmas’ caper with plenty of adventure and cheese. Perfect for the whole family and proving yet again that Netflix original programming is second to none. This is cinema worthy production. This includes one of our personal faves Shrek the Halls which will be played in our house many times over December. It also has Merry Madagascar, Po’s Winter Wonderland, Dragon’s Gift of the Night Fury and many more. On Netflix, search Dreamworks Holiday Classics and you’ll find a similar collection from 2011.

New but we didn’t really rate this. Despite it being a short, the kids got bored. It’s sweet and ye olde but not super christmassy and no laughs. A Christmas themed Frozen special. Cute short with some catchy songs and funny moments the whole family can enjoy. My personal fave is when the Oaken guy whips his towel off for Olaf, makes me laugh every time.

A seasonal Troll’s short where Queen of the Trolls, Poppy, finds out that the Bergen’s don’t have holidays and enlists the help of her Troll friends to fix that. Not Christmassy enough for me tbh.

Stick Man lives in the family tree with his Stick Lady Love and their stick children three, and he’s heading on an epic adventure across the seasons. Will he get back to his family in time for Christmas? Voiced by esteemed British actors such as Martin Freeman, Jennifer Saunders and Rob Brydon. We haven’t watched this one yet but it sounds cute.

I was hesitant to include this as it’s not massively Christmassy but it is technically still a Christmas film so here it is. ‘It’s a post-Christmas play-date and the toys have to go up against the fearsome and aggressive new dino toys’. Not my favourite Toy Story short by any stretch.

Personally, I think this sequel and homage to the Snowman is better than the original. I love the track Light the Night by Andy Burrows (of Razorlight, We are Scientists and Smith and Burrows fame), it’s such a tune.

‘Arthur Christmas reveals the incredible, never-before seen answer to every child’s question: ‘So how does Santa deliver all those presents in one night?’ The answer: Santa’s exhilarating, ultra-high-tech operation hidden beneath the North Pole. But at the centre of the film is a story about a family in a state of comic dysfunction and an unlikely hero, Arthur, with an urgent mission that must be completed before Christmas morning dawns.’ Good film but feels a bit long and looses it’s way at times.

‘Magic dogs and an elf team up with two children to rescue Santa who has lost his memory’. These films with the talking animals are pretty ghastly but kids tend to love them! If they like this then there is also Santa Paws 2: The Santa Pups (2012). If you like puppy Christmas films there is also Santa Buddies. I was going to add Santa Claws in at this point (for the cat lovers) but with an awful plot and IMDb rating of 3 I couldn’t do that to you!

British comedy based around a school nativity play starring Martin Freeman. Nativity Rocks, the 4th sequel to this, is out at cinemas this Christmas but is currently scoring a dismal IMDb rating of 4.8. I find anything below a 5 is painful.

‘George and the Man in the Yellow Hat are having a merry time counting down to Christmas. But neither can decide on what to give each other. Will they find the answers before Christmas morning?’. I like watching Curious George so I can feel intellectually superior to the Man in the Yellow Hat who despite being some sort of scientist is frankly devoid of any common sense. In my humble opinion he gives that monkey far too much freedom and responsibility.

This is our family Christmas film. We watch it on ‘Christmas tree day’ every year. It holds such special memories for our family after our son Arlo fell in love with it at 2 years old. It’s an excellent Christmas film full of songs, adventure and magic.

Perhaps the funniest Christmas film of them all. Can you believe it’s getting so old now – I still think of this as a new Christmas film.

A collection of Christmas themed Disney shorts. This one is my favourite Mickey Christmas production as it contains Mickey’s Christmas Carol which is a lovely 26 minute Disney short version of A Christmas Carol (scoring 8 on IMDb in its standalone movie format). It also has another favourite of mine ‘Pluto’s Christmas Tree’ featuring Chip and Dale.  I’m pretty sure both of these were on my Disney videos from the 80s/90s and watching them takes me right back to being a girl again, excited for Christmas.

I’ve never liked the Grinch. I dislike the aesthetics of it and find the story boring, so does my 6-year-old but my 3-year-old loves it. We are looking forward to checking the new one out though.

‘When Santa cancels his annual flight because of a hurt reindeer, a young Christmas loving dog named Olive is convinced she has what it takes to get Santa’s flight off the ground and save Christmas.’ Olive is voiced by Drew Barrymore. Another one we’ll be watching for the first time this year.

The plot of this is absolutely bonkers but it’s a Christmas classic none the less! ‘A father who can’t keep his promises, dies in a car accident. One year later, he returns as a snowman, who has the final chance to put things right with his son, before he is gone forever’. Mega creepy but also all the feels.

A father vows to get his son a Turbo Man action figure for Christmas. However, every store is sold out of them and hijinks ensue as he tries to get one in time.

When Tim Allen inadvertently kills Santa on Christmas Eve, he finds himself magically recruited to take his place. Very funny and dry classic for the whole family to enjoy.

A lawyer and a little girl must prove that a man claiming to be Santa Claus is the real thing.

Jack Skellington, king of Halloween Town, discovers Christmas Town, but his attempts to bring Christmas to his home causes confusion. Not super Christmassy and not my most fave. To be honest, I see this more as a Halloween film but the Christmas Town stuff makes it a crossover film.

The Muppets version of a Christmas Carol. I can’t believe this was 1992. I thought it was modern. I feel old.

Is there anyone left who has not seen this? If so, just go bloody watch it already, it’s a classic.

The legend of Santa Claus is put in jeopardy when an unscrupulous toy manufacturer attempts to take over Christmas.

The 1980s Christmas classic in which a young boy builds a snowman that comes to life on Christmas eve and takes him to the North Pole to meet Santa Claus. In the re-released version, David Bowie voices older James, oh how I miss him so.

A misfit reindeer and his friends look for a place that will accept them. Old AF but excellent IMDb rating gets this on my list.

So there you go, enough films for all of December, and some of November too if you are an eager beaver! What are your family’s favourite Christmas films? Let me know in the comments. Disclaimer: This blog post contains affiliate links. If you buy a product through an affiliate link you won’t pay a penny more but I will receive a small fee for referring you. You can read my full disclosure policy on my about page.